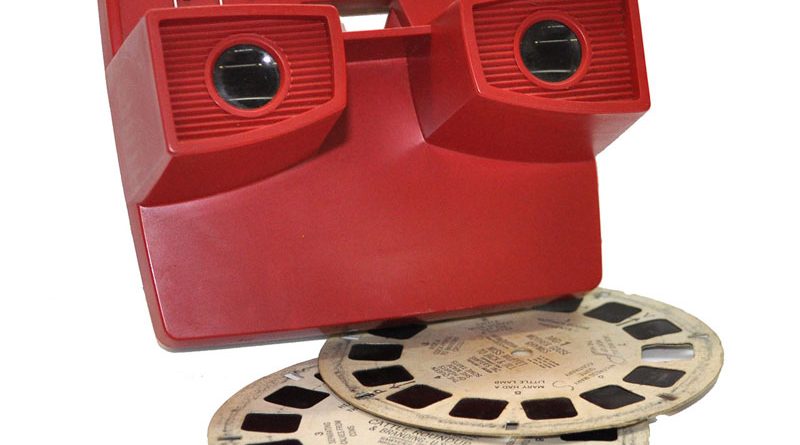 Virtual Reality (VR) is being touted as the “next big thing” in technology. We’ve seen these before; depending on your age you may remember 3D television and film, the iPhone, the Walkman, MiniDisc, DAT, “smart” appliances, colour television, and movies with sound (“talkies”). Some of these caught on – I hear colour television is rather popular – while some failed spectacularly. With its wide range of applications, however, VR seems likely to make inroads into our technological lives in one way or another.

VR has potential uses in such diverse fields as architectural design, medical training, virtual tourism and psychotherapy, but because here at Home Leisure Direct we always like to focus on fun, we’ll be looking at the primary intention of VR: video games.

While we can trace the theoretical origins of VR back to 1930s fiction from authors such as Stanley G. Weinbaum and Antonin Artaud, to me it’s clear that the original VR was present in the humble (but still incredible) View-Master. Nearly everyone will have tried one of these at one point or another, and if not, ask your parents or grandparents to have a look in the attic. They’re more than likely to have one, since they were introduced as far back as 1939 and an estimated 1.5 billion reels of photos have been produced.

These amazing devices only present still images, but through the clever use of stereoscopic photography have been displaying 3D imagery for over 75 years. Progress was slow from this point, however: the 1950s saw the invention of the “Sensorama” (could there possibly be a more 1950s name for a VR-type device?) but it wasn’t until the late 1960s that the world saw its first true VR technology: the head-mounted and terrifyingly-named “Sword of Damocles”, developed at MIT. With only wireframe graphics but accurate head-tracking, The Sword of Damocles allowed users to look around virtual rooms for the first time, setting the stage for VR devices to come.

Technologically, things went quiet for the next couple of decades, with only blips such as the Aspen Movie Map (a virtual map of Aspen, California), which was created in 1978, existing to break up the lack of progress. Atari and VPL Research also founded research laboratories for VR in the 1980s, but all that led to was aberrations such as the Power Glove (“it’s so bad”). In 1990, however, VR took its first real steps into gaming with the reveal of “Virtuality”.

Intended to be the new technology that would rule arcades, with both stand-up and sit-down style machines, Virtuality did at least have the players involved in games, even if they weren’t very interesting, gave you a headache and made you look like an idiot. Powered by an Amiga 3000 at first before upgrading to the more advanced 486-PCs in a hardware revision, Virtuality offered a range of games, including “Hero”, “Legend Quest” and “Total Destruction”. Clearly, the budget was all spent on the technology and none was left over for creative naming. Virtuality also brought us the frankly insane Pac-Man VR, which allowed you to play Pac-Man from the perspective of the titular character and added multiplayer modes. Pac-Man VR must certainly be the ultimate way to experience what it’s like to run around in dark rooms, munching pills and listening to repetitive electronic music.

As the 90s wore on, the two main gaming companies both made their attempts at getting into VR: Sega with the Sega VR (great name there, guys), and Nintendo with the Virtual Boy (actually, Sega’s wasn’t so bad after all). The Sega VR never made it to markets, as Sega pulled the plug after they allegedly found the virtual reality to be too disconcertingly realistic. Having seen the atrocious frame rate of Virtuality for myself, and bearing in mind the charming but totally unrealistic graphics of the Mega Drive, it’s very hard to take this claim seriously. Testers did report headaches and motion sickness after extended play, however, which seems much more believable.

Nintendo’s effort was slightly more successful: the Virtual Boy is a real gaming console that you can actually buy, though you really shouldn’t. It never saw release over here in Europe but remained on American and Japanese shelves for approximately six months before being discontinued.

Invented by Gunpei Yokoi, creator of the Game & Watch and Game Boy, the Virtual Boy was an impractical, nauseating brain aneurysm in a box. Games were displayed in sickening monochrome red, the 3D effect was decent but caused eye strain very quickly, and the entire machine was mounted on a stand, despite purporting to be portable. There was no head tracking, only 22 games in total, and the price was way too high. Interest in VR had been high up until this point, with the film “Lawnmower Man” bringing the concept to public attention, but after the failure of the Virtual Boy interest seemed to wane rapidly. If Nintendo couldn’t do it, it seemed unlikely that VR gaming would ever be more than a nice idea.

While VR didn’t go away completely, almost no consumer VR products were released after the Virtual Boy for more than 15 years. Software such as Google Street View, which features a 3D stereoscopic mode, and hardware like 3D televisions and Nintendo’s 3DS console have experimented with 3D visuals, but true VR has been dormant for a long time. The oncoming explosion of VR products seems almost intended to compensate for this dormancy.

Looking at the VR products of the present VR craze, there are arguably three main competitors in the running: Oculus VR, who previously released the Samsung Gear VR and now have the Oculus Rift available; HTC, who have jumped from making mobile phones into a collaboration with Valve to make the HTC Vive, and Sony, whose PlayStation VR is due to arrive later in 2016.

The Oculus Rift could arguably be given the honour of rejuvenating interest in VR, as its Kickstarter campaign raised over $2.5 million in 2012, proving there was a market for home VR headsets. Unlike previous attempts at VR, the Rift is the real deal, with high-resolution graphics and a frame rate that won’t make you sick, 3D audio headphones for realistic sound, and an external tracking device that keeps tabs on where your head is at all times. Having tried this for myself, I can vouch for the accuracy of movement and immersion the Rift provides. For example, when playing Radial-G, a racing game with futuristic bending tracks, I was able to look up into the sky to see where the track was heading, and adjust my racing line accordingly. While you could argue that this is possible with an analogue stick on a controller, the Rift provides an immediacy through the natural instinct to move your head that makes gaming completely different.

Facebook certainly seem confident in the success of the Rift; in 2014 they purchased Oculus for $2 billion. This means Oculus now have the cash to compete with the other big boys in the VR market, so it’s unlikely to be a mere flash in the pan.

The Oculus Rift is currently priced at £499, which isn’t the most bank-breaking option out there, especially considering the incredible nature of the experience. This doesn’t include the computer necessary to run the software, however, and touch controllers will cost extra.

Representing the very top of the pile, at least when it comes to cost, the HTC Vive is looking to be the best VR experience you can have in your own home, possibly even better than your actual reality (depending on how good or bad your life is). While it incorporates a similar headset to that used by Oculus, the tracking system – known as Lighthouse – will actually map your playing space and include parts of it in your virtual world. In basic terms, that means that while you’re wandering around with a headset blocking your vision, you’ll still be able to see the sofa.

While this extra layer of technology is exciting, what’s also got people excited is that the Vive is produced in collaboration with Valve, who make Steam. If those words don’t mean anything to you, it’s safe to assume you’re not a PC gamer, as Steam is the biggest game marketplace by far on home computers, which has made Valve phenomenally rich. With their servers and cash backing, alongside what already looks like fantastic technology, the Vive is set to be the premium VR option for 2016. This does come at a price, however: it’s been announced that the Vive will sell for a massive £689, and that doesn’t include the PC you’ll have to connect it to, let alone the vet bills when you accidentally tread on the cat.

The third big player in the headset VR space is Sony, who have announced that their PlayStation VR headset is scheduled to launch in October of 2016. It’s rumoured to be less powerful than the Rift or Vive, which would make sense considering the fact that it’s powered by a PS4 instead of a more powerful computer. However, with Sony’s full backing it stands to reach a lot of gamers.

The PSVR – as it’s currently known – stands to do very well when released; the lower price point (a mere £349), the huge number of PS4 owners and the ease of setting it up should make it a great choice for more budget-conscious VR players. Pre-orders have already sold out in the UK, so just pinch one from a friend when they’re not looking.

If none of these options meet your budgetary expectations (i.e. the price nearly gave you a heart attack), then there are alternatives available that will still give you a VR experience. While there are many companies trying to crack the budget VR market, the option that’s made the most headway is Google Cardboard.

While it’s little more than a piece of folded cardboard with some lenses in it, Google Cardboard is available for all Android and iOS phones (in other words, most smart phones), and requires nothing more than your phone and a head strap. Of course, the games and applications aren’t up to the standard of the Vive, PSVR or Rift, but considering Cardboard can be picked up for around £20, it’s a fantastic way to experience VR without remortgaging the house.

Bringing the history of VR almost full circle, View-Master have announced a collaboration with Google to create their own Cardboard headset, due to launch in autumn of 2016. This will be a great way to experience VR and the fun of View-Master at the same time, and without the hassle of losing or bending the reels of film. Technology often moves in cycles, so now that View-Master is coming back, everyone’s parents and grandparents can claim they were into VR before it got big.

VR is obviously set to take off in a big way in 2016, so now that you’re up to date on the history and current technologies you’ll be able to make a decision on what device is right for you. Just don’t get a Virtual Boy, unless you know a good optician.